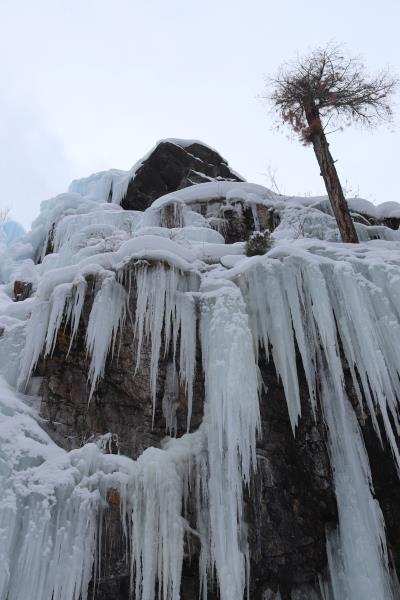 View of Ouray Ice Park from bridge along perimeter Close up of ice in Ouray Ice Park

On Saturday and Sunday, January 11th and 12th, 2020, I took a 2-day Intro To Ice Climbing course in Ouray, Colorado, run by San Juan Mountain Guides. Having recently moved to Colorado and wanting to experience more of what the state has to offer, I decided it would be a unique experience to have this Winter season. I'm not exactly sure how I first heard about ice climbing or Ouray but I had been interested in visiting this area for over a year.

To get to Ouray, I drove from Denver and stayed in Montrose, at Days Inn, on Friday night. I then woke up around 5:00AM Saturday morning and drove to Ouray. Saturday night, I stayed in Ouray at the Historic Western Hotel (a bit of a spooky place!), which was across the street from the San Juan Mountain Guides building.

The ice climbing course began at 7:30AM on Saturday. First, everyone taking the course met at the ice climbing guides' building on Main Street. The participate to guide ratio was 3 to 1, with 2 guides. The guides for this course were Aaron and Ryan.

After everyone had arrived, we all sized up for boots, got a harness, helmet and ice climbing crampons. It is generally best to have a bit of space in the front of the boots since ice climbing requires kicking forwards with the toe into the ice. The guides also checked gloves people brought. I ended up using some tactical gloves with leather palms and thick material on top of my knuckles. This was surprising useful because I hear it is common to punch the ice accidentally when throwing the axe into the ice.

Once everyone had their gear in order, we took a truck to the Ouray Ice Park, about 5 minutes or less from the mountain guides office. Upon entering the park, we walked about 10 minutes or so, then looked at tying knots to anchors and the process to go through to get ropes down a route. Ouray Ice Park is free to use but climbers must bring all of their own devices such as ropes, carabiners and so on. Safety is the responsibility of the climbers.

After learning the tying-in process, we walked down into the South Park section of the ice park to learn how to throw the ice axes, get tied into the ropes, belay and kick into the ice. The process of throwing the ice axes was said to be similar to throwing darts, with more emphasis on the wrist action and keeping the elbows in. The place to aim is the more depressed, indented areas of the ice to get a better hold and prevent large pieces from breaking off. When kicking, it is best to have the toes up and feel some pressure on the shins. Otherwise, a good foot hold is unlikely.

As a drill, we tried to climb with only one ice axe. For some, they even tried climbing without any ice axes. The purpose of this was to realize the importance of foot placement. All people taking this ice climbing course had no prior experience and had some indoor rock climbing gym experience. Everyone was fit enough to do the course.

By the end of the first day, everyone had climbed a few ice routes. Everyone also belayed. We all knew the climbing protocol to say when starting and ending climbs. The guides checked everyone's knots and confirmed everything was in order before each person began climbing. We ended at about 3:30PM. At 4:00PM, the park starts dripping water on the routes for the next day. All but two of the routes in the park are man made.

On the second day of the course, everyone again met at 7:30AM at the guide building. This time, as individuals and teams, we were to construct the knots and lay down the ropes for the routes we were to do. We were supervised to confirm everything was in order.

Instead of walking down into the canyon, this time we rappelled down. The guides had a secondary belay set up in the case we were going too fast and needed additional support to prevent falling. We wore our day backpacks when rappelling down, it was important these had nothing hanging off of them otherwise there was the potential for something loose to get stuck in the ATC device.

Once everyone had rappelled down, we went up more difficult routes. The steeper routes emphasize the importance of good form, throwing the axe above your head, kicking into the ice the right way for foot support, and moving up correctly.

We learned some additional form skills and also about ice screws this day. It started snowing and was at times windy by the end of the day. Collectively, everyone wanted to return at about 3:00PM due to being tied and cold.

I feel that the 2-day Intro To Ice Climbing course offered by San Juan Mountain Guides is ideal for beginners in good shape with exposure to indoor rock climbing. Given the small group size, it is possible to ask very specific questions to the guides and have the course catered to your own goals.

Ice climbing differs from rock climbing in many ways from form to tools, so while some of the strength from a gym will help, the techniques are completely different. There are similarities in the top rope belay process, however.

The guides are knowledgeable and will correct you when they see you have bad form. They also review each climb for safety purposes, which is much more comforting than attempting to learn climbing with random people in the ice park.

After taking this course, I believe it is possible to go to the ice park and climb with other people. This would require reviewing all of the knots and tie ins first. There are many bad practices in the park so it's unadvised to get on a top rope line without thoroughly examining it at the top.

Another option one can take, with a bit more fitness in a rock climbing gym, would be to take an intermediate ice climbing course. This is probably the more practical thing to do if you want to continue. If interested in purchasing gear, it is recommended to go to an ice climbing festival first.

People came from all over the United States, from North Carolina to Alaska, for this course. Ouray, Colorado is clearly a world-renown destination for those interested in ice climbing. If you are interested in learning ice climbing, I'd recommend the 2-day course from San Juan Mountain Guides. To learn ice climbing, you have to do it first-hand.

Knots To Learn and Practice For Ice Climbing

Other Things To Do In Ouray In Winter