Looking back at Taputaputa Beach On Tuesday, December 20th, 2022, I woke up at the Spirits Bay campground. From here, I drove to the Taputaputa Campground and paid for 2 nights of parking. At 10:30AM I began hiking the Te Araroa Trail to Twilight Beach, arriving at 3:20PM. The time estimate for hiking this distance was 7 hours 30 minutes. I was able to hike it in about 5 hours with only a few breaks.

Many people hike the entire Te Araroa Trail, which takes 4-5 days. Since I was alone and could not arrange a pick up, I hiked only part of the trail and went back the next day, taking a longer route to Cape Maria Van Diemen.

My original plan was to park at Cape Reinga Lighthouse, however I was told at a campground that it was not safe to leave my van overnight in the parking lot due to the lack of security. Due to this warning, I parked at Taputaputa Campground and arrived back on the 21st to camp there.

I started the return trip from Twilight Beach Campground at 8:15AM and arrived back at Taputaputa Campground at 3:35PM. Along the way, I ran out of water due to my water bladder leaking. Fortuntely, there was drinkable water at the lighthouse and I knew this in advance from visiting it the day before. Otherwise, I could have become dehydrated.Twilight Campground did have rain water which had to be treated of boiled to drink and I had run out of propane to boil as much water as I needed.

Overall, this is a varied hike with many ups and downs over a variety of terrain. There were few people along the way. Perhaps it would have been better to through hike the entire trail but I was able to hike along the most varied section of it with a different route back that gave me a better perspective. 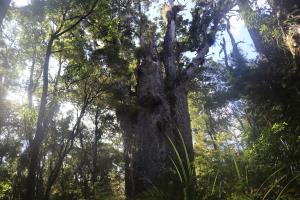